Several years ago, when I was still in college, I took a Christian History class. Being at BYU, there was definitely an LDS lens to the class. On the first day, the professor got up and asked us about some of the things we were jealous of in other religions. We talked about things other churches did or had that we wished were more a part of our own Mormon culture and worship. It was an interesting and eye opening conversation that first led me to start thinking about how this Mormon thing doesn't all have to look the same and that there are things in every religion that are worthy of incorporation into our own spiritual life.

A few years later I was introduced to Waldorf education. Festivals are very important in Waldorf family life, and while each family gets to choose which festivals they celebrate, the majority of Waldorf resources focus on certain festivals in the Catholic liturgical year. Most notably, Michaelmas, Martinmas, St. Nicolas Day, St. Lucia Day, Advent, Epiphany, and Candlemas. As I learned more about these festival/feast days, I realized that there was a really beautiful yearly rhythm to it and that each festival helped prepare me spiritually for other holidays.

With these thoughts in mind, I wanted to introduce my Mormon friends especially to these festivals and a few others that are special to our family and that I believe incorporate beautifully into the LDS religion and will enhance your spiritual journey through the year.

So let's begin with the first big festival of the school year! MICHAELMAS. 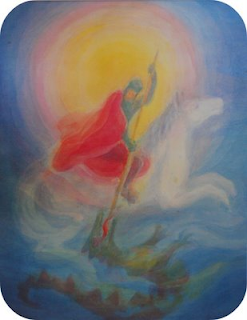 Michaelmas is the celebration of the archangel Michael throwing Lucifer out of heaven before the world began. It is often kind of merged with the legend of St. George who defeated a dragon. So, often the pictures and stories have to do with Michael defeating Lucifer depicted as a dragon. You can read the Catholic version of the story here. As you do so, I hope you'll be able to see how similar it is to our understanding of premortal life. It doesn't take much to tweak the story just a little bit to tell to your children about the war in heaven.

Michaelmas is the perfect time to reflect on the importance of our own free agency. After all, isn't that what the war in heaven was all about? And more importantly, what are we doing with our free agency? Have things crept into our lives and become dragons in need of slaying? Now is the time to fight back and vanquish your pet sins, weaknesses, and addictions. Michael and all the hosts of heaven defeated Lucifer, you can conquer your dragons too.

Ways to celebrate Michaelmas with your family. 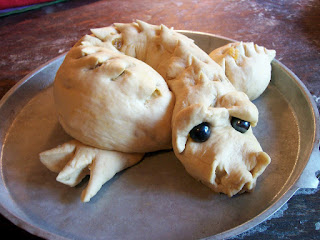 Found at http://bobbinsandbrambles.blogspot.com/2010/09/michaelmas-bakingdragon-bread.html (There's a recipe there too!)

Make dragon bread (bread shaped like a dragon.)
Act out the story of Michael throwing Lucifer out of heaven.
Make golden capes and wooden/cardboard swords and shields to battle dragons with.
With your older children, talk about what dragons in your life you would like to conquer.
Read this beautiful book about St. George.


Just so you know, celebrating a festival the "Waldorf" way is not a huge affair. You don't treat it like Christmas or Thanksgiving where you spend all month gearing up for it. You might build up to Michaelmas for a few days while you sand down your swords. But it is really supposed to be a very simple celebration. Tell a story, sing a song, eat a special kind of food, do a craft. That's it. You're done. (And if I'm being honest, we won't be making the swords this year.)

Now much of what you find for some of these Saint's Days (especially Michaelmas) read like prayers to these saints. As Mormons, I know this is a concept most will feel uncomfortable with. But in this series, I'm going to try to provide you with a few poems or songs that you can use. Here's the one I like for Michaelmas.

"Brave Saint Michael is my guide
as free and fearless forth I ride.
With courage like Saint George of old
I dare to fight fierce dragons bold."

Inside Out & Back Again
by Thanhha Lai
tagged: to-read and what-i-m-reading-lately

Gossip from the Girls' Room
by Rose Cooper
tagged: what-i-m-reading-lately

The Evolution of Calpurnia Tate
by Jacqueline Kelly
tagged: currently-reading and what-i-m-reading-lately

The Tale of Despereaux
by Kate DiCamillo
tagged: read-alouds

Because of Winn-Dixie
by Kate DiCamillo
tagged: read-alouds

Recommended Reading for Motherhood and Homeschooling

Daring Greatly: How the Courage to Be Vulnerable Transforms the Way We Live, Love, Parent, and Lead
by Brené Brown
tagged: motherhood-and-homeschool-reads

Last Child in the Woods: Saving Our Children from Nature-Deficit Disorder
by Richard Louv
tagged: motherhood-and-homeschool-reads

Under Pressure: Rescuing Our Children from the Culture of Hyper-Parenting
by Carl Honoré
tagged: motherhood-and-homeschool-reads

What are you Looking For?